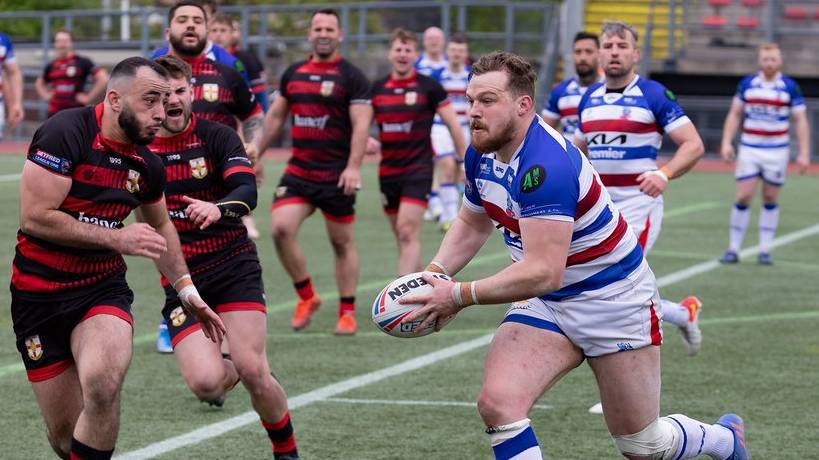 Rochdale Hornets kept their early season momentum going with a 56-22 victory, away at London Skolars.

Despite not being at their best, Hornets ran in ten tries including a hat-trick for Tom Ashton on his return from injury.

The impact of Ashton’s recall was felt right away, with the powerful centre breaking tackles right from the first whistle.

But it was Skolars who struck first in this Betfred League 1 clash, with skipper Aaron Small latching on to his own grubber kick to go over from short range.

Jonny Bell added the extras to move the hosts into an early 6-0 lead.

From the restart, Skolars’ ill discipline allowed Hornets to gain valuable field position and before long Ben Calland had gone over for his first league try of the season.

Calland was soon followed over the try line by his centre partner – Ashton.

A great break by Cian Tyrer had allowed Hornets to get good attacking field position once more, and from there Gregg McNally was able to find Ashton who powered over the try line.

The London side responded well to going behind, but it was Hornets who struck next.

Some typically fast feet allowed Rangi Chase to break the line and when his offload found Sheridan, the scrum-half picked out McNally who had an easy run-in for his eighth Hornets try.

It was then the turn of Fuifui Moimoi to get in on the action, as the 41-year-old powered over from short range.

Sheridan added the extras to extend Hornets’ lead to 16 points.

Small’s second try, five minutes from half time, brought the deficit back to ten points but another powerful Ashton score shortly after meant that Hornets went in 28-12 up at the break.

It was the team from the capital that would get the first score of the half once again, after Jarred Bassett found Leighton Ball with an offload following an excellent line break from the fullback.

With the deficit back to ten once again, Hornets were determined not to give the hosts a way back into the game.

Ten minutes into the second half, Gavin Bennion held off two tackles to score before Ashton completed his hat-trick with another emphatic finish.

Skolars hit back through Ball once again, but it was almost instantly cancelled out by a try from Ben O’Keefe – the Wigan loanee showing quick feet to leave the London defence for dead.

Sheridan slotted the resulting kick, before going on to score a try of his own five minutes from time.

A well-timed pass from Aiden Roden allowed second row Ben Forster to charge up the field, before assessing his options and putting Sheridan in who made it seven tries in his last four games.

The scrum-half converted his own try to bring up the half century for Rochdale.

But they weren’t finished there and two minutes from time, prop forward Callum Marriott went over for a well-deserved try - after an excellent individual performance.

The victory is Hornets’ fourth, in as many games, and they’ll be determined to keep this impressive run going when they visit the south coast to take on Cornwall next Sunday (1:00pm kick-off).