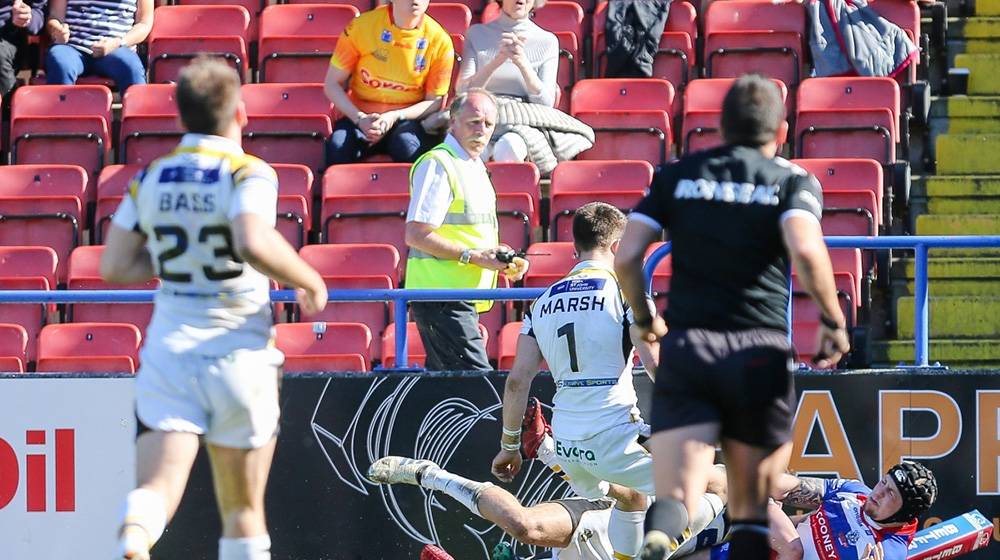 Rochdale Hornets played host to the York City Knights in a Betfred Championship thriller at the Crown Oil Arena.

A brace of tries from Jason Bass saw the Knights come out 24-18 victors in a thrilling match that saw Matt Calland’s side make a second half comeback however they fell just short of the line.

The Hornets started the match on the front foot, with halfback Dan Abram kicking two 40/20’s in the space of five minutes.

However, the visiting Knights proved good in defence stopping the Hornets side from opening the scoring.

It was the Knights who opened the scoring when a string of quick fire passes found Matthew Marsh who crossed over on the left hand side of the posts. Robinson converted to make it 6-0 to James Ford’s side.

The  visitors doubled their lead when Jason Bass crossed over in the 17th minute for his first of two first half tries.

Judah Mazive then crossed over a few moments later, however the Hornets did not hold back with debutant Lewis Sheridan collecting a deflected kick through to touch down and make it 4-14.

York continued to punish the Hornets much to the enjoyment of the travelling Knights faithful with Jason Bass going over for his second of the game.

The second half was an arm struggle to say the least, the opening thirteen minutes was all about defence, but to the ground’s surprise is was the Hornets who opened the scoring when they applied pressure to the York line with Liam Carberry barging his way over.

However, the Knights hit back when Jack Blagbrough crossed over in the 55th minute.

Hornets turned on the gears in the final fifteen minutes, applying pressure to the York City Knights line with two repeat sets and it was Brandon Wood who crossed over much to the displeasure of the away supporters when he squeezed over in the corner after the referee spoke to his touch judge.

The final ten minutes were tense with the Hornets camping on the Knights line and started to throw the ball round with ease. York started to tire towards the end of the game and a 40/20 attempt from Dan Abram was patted backwards and spilled in the in goal area forcing a goal line drop out.

Knights kicked the ball long with Brandon Wood collecting it fifty metres out and forcing his way down the middle, the ball was floated around the try line, but the hooter sounded as Rochdale came close to the line.

Despite a valiant effort from the Hornets they remain bottom of the Betfred Championship and the Knights jump to third in the ladder.